In case my header for this post didn’t clue you in, I’m still thinking about fruit . . . the spiritual kind of course.

Jesus’s mother, Mary, had a cousin named Elizabeth who lived about 60 miles away in the hill country of Judea. Elizabeth was married to Zechariah, a priest. The Bible says they were upright in the sight of God and observed all the Lord’s commandments and regulations blamelessly. (Luke 1:5-6)

Yet, Elizabeth was barren. Being unable to conceive meant she was disgraced and cursed in the eyes of her community. I can only imagine how painful it must have been for this faithful couple.

When Elizabeth was very old – well past the point of childbearing – God answered their prayer and Elizabeth got pregnant. Tradition says that Elizabeth and Zechariah were in their 90’s when they were blessed.

Mary learned of Elizabeth’s pregnancy when the angel Gabriel visited her with an astonishing announcement. He told her she would conceive God’s son by the Holy Spirit and Mary, an unwed virgin was mystified by the news. The angel comforted her with these words:

“Even Elizabeth your relative is going to have a child in her old age, and she who was said to be barren is in her sixth month. For nothing is impossible with God.”

Mary had to see this for herself.

The Bible says: At that time Mary got ready and hurried to a town in the hill country of Judea, where she entered Zechariah’s home and greeted Elizabeth. When Elizabeth heard Mary’s greeting, the baby leaped in her womb, and Elizabeth was filled with the Holy Spirit. In a loud voice she exclaimed: “Blessed are you among women, and blessed is the child you will bear! But why am I so favored, that the mother of my Lord should come to me? As soon as the sound of your greeting reached my ears, the baby in my womb leaped for joy.” (Luke 1:39-44)

The actual words Elizabeth uses in part of verse 42 is “. . . and blessed is the fruit of your belly.”

Elizabeth’s baby John (aka John The Baptist) leaped for joy over the fruit in Mary’s belly. How awesome is that! 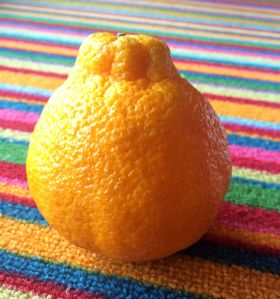 We are to be fruit carriers. We’re to bear it within us and share it with the world. Often it takes awhile to come to fruition. Do you know what the old Middle English definition of fruition is?

Are you like me . . . waiting to actually see some fruit? Do you feel like you’ll be too old to enjoy it?

Don’t despair. It’s coming in God’s timing and in His way!

I’m encouraged by Mary and Elizabeth’s story, it proves that fruit production is ultimately God’s business. When we faithfully trust in him, His plans come to fruition.

Your turn: What are you trusting and waiting on God for?